The Problem, and the Lunar Solution 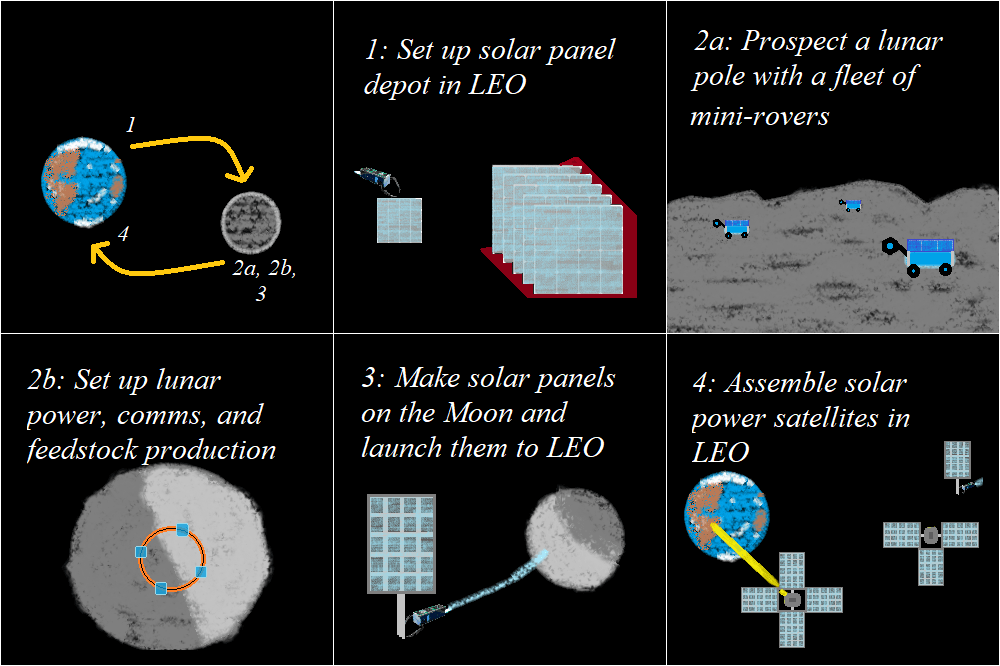 Written By: Adrian Tymes and Sabrina Westerman from CubeCab, on June 30, 2022

The Basis of Lunar Infrastructure

Most of us can imagine future civilization on the Moon: lunar cities built by lunar factories running on lunar resources. There has even been much written about what to do once we have that.  Harder to envision is how we get there.  Those concerned with defending facilities often focus less on the realities of startup and sustainment, without which there can be nothing to defend in the first place.  Thus, this article lays out one path to getting started, then notes some consequences for defense interests.  Each of the paragraphs in this article, save the first and last, outlines a distinct project that can be funded and run, delivering results, without depending on later projects for justification.
Debris has been piling up in Earth orbit since the start of our space program.  Collectively we have placed millions of dollars worth of metals, plastics, and other materials up there.  Most remediation attempts treat this as trash, but we see it as an in-situ resource in orbit.  Drones could gather and grind debris into sub-micron particles, for use as reaction mass.  At first this might merely propel the drones to gather more debris: an effectively (in the short term) unlimited fuel supply.

These drones might grow into simple 3U CubeSats (perhaps launched by CubeCab’s Cab-3A) consisting of commercial-off-the-shelf parts and one or two sub-kilogram waldo arms with cutting or welding tools.  Amateur groups could construct and launch such drones on small budgets. They would then leave it with the collective once their project was complete.  These drones might head to derelict satellites, cut off their solar panels, grind up or deorbit the rest, and haul the panels to a designated spot in orbit that acts as a depot.  Owners of other satellites could request panels, which the drones could bring over and wire up.  This establishes a market for solar panels delivered to orbit.

Meanwhile, we send prospector rovers to the Moon.  CubeCab has an architecture for a vehicle to transfer 3U CubeSats to lunar orbit on sub-million-dollar budgets.  Once several rovers and relay stations are in lunar orbit, land them in a ring around one of the poles so the rovers can outrace local sunset and remain in sunlight.  The south pole may be favored as it seems to have more water, but either one will do.  The relays (immobile but able to hibernate through lunar night) send up data from nearby rovers. Meanwhile, the rovers survey the regolith in detail to find optimal mining sites.  Eventually, the rovers make cables from the most suitable regolith, then connect the stations so the stations can wire power and data to one another, so a facility could plug into a station and have power even during lunar night.

Once that is done, send up a smelter. Begin to smelt and process regolith into feedstock, and commence building a lunar base.  The potential to build on the Moon once you have feedstock has been extensively documented elsewhere.
It does not take long to get to the point of building solar panels, and setting up a railgun launcher to send these solar panels back to Earth orbit (any that are not retained to further build out lunar infrastructure), far cheaper than Earth-launched solar panels.  This addresses the primary hurdle in creating solar power satellites, to provide cheap clean power on Earth.

Where NSTXL Joins the Story

All of this results in a growing set of infrastructure that must be defended.  This requirement gives a strong unclassified justification for programs like the Cislunar Highway Patrol System, beyond mere speculation that traffic to the Moon might increase at some point in the future.  These facilities also generate revenue that can be tapped to help fund such programs. Additionally, the DOD has existing interests in making solar power satellites practical to power remote bases without as much petroleum import. Alongside this, they hope to reduce space debris. This is a constant threat to orbiting assets, and vital to today’s military.  They also lay the groundwork for additional lunar development. It is easier to set up manned research or an industrial base on the Moon if there is already a local supply of power and building materials.