A Journey to Friendlier Pentesting 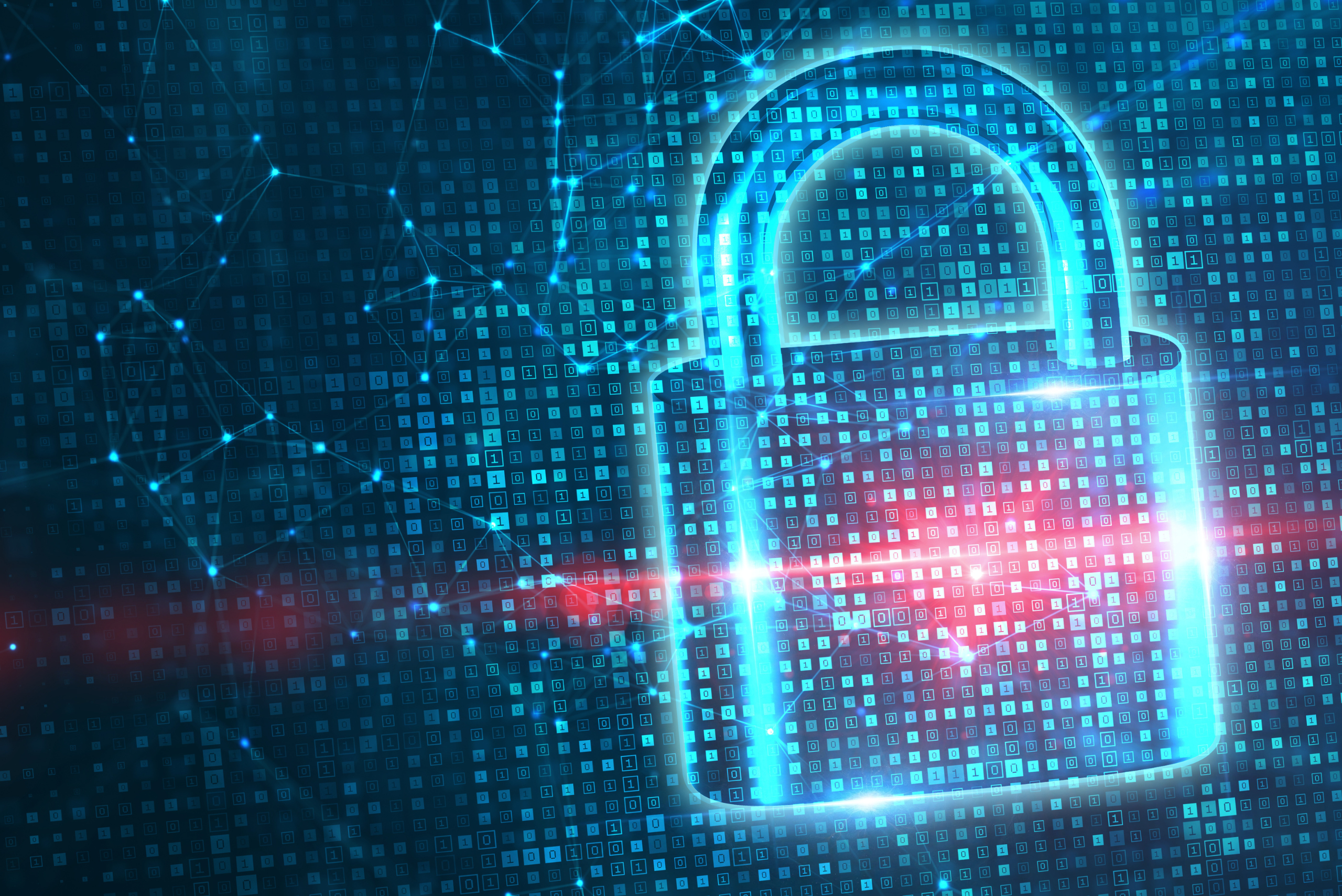 Separate Ways, but Not Worlds Apart: A Journey to Friendlier Pentesting was Written By: Tyler Fordham, Senior Principal at Dark Wolf Solutions, LLC

Separate Ways, but Not Worlds Apart: A Journey to Friendlier Pentesting

As an offensive security professional, one can often face unique challenges compared to colleagues in the rest of the information technology space. After all, why wouldn’t you – hacking is scary stuff that you see the bad guys and anti-heroes do in movies, right?! While that trope seems silly to type out, particularly for a reader in the know, the reality is that your average person’s reaction is not far from that exact insinuation. Any penetration tester foolish enough to talk about their job to family or strangers has been asked if they could hack phones, Facebook accounts and the like by those without knowledge of the discipline. From personal experience, they don’t stop believin’ even when you tell them it’s not that simple.

While your fellows in the computer industry will generally not be that out of touch, your everyman’s perception of “hacking” illustrates an important point to consider professionally; that a lack of information can cause people to misunderstand the role of ethical hacking. From the perspective of a penetration tester, this is a pertinent thing to recognize, because these impressions made by media or prior negative experiences can create an adversarial relationship before you ever interact. To invoke some of the most common:

Here’s the honest reality – in many cases, none of these thoughts are really incorrect! There’s a significant difference between a communicative, improvement-driven penetration test versus a results-driven engagement focused on getting as many “wins” as possible. While these two things can happen effectively in concert, too often are offensive security assessments only the latter. While going full bore with no communication has its time and place (an internal red team assessment, for example), this engagement style can sour relationships with stakeholders and validate some of the fears mentioned above.

On the other hand, a capable and mature offensive security team has the capability to gain and keep the trust of every stakeholder described above when an appropriately light touch is used. The guiding principle to keep in mind is that penetration testing someone’s system is like holding their baby; you’re being trusted to be hands on with something very important to them that’s taken sweat and tears to create. Following the childcare analogy, making it clear that you’re on someone’s side and know what you’re doing is the best way to assuage their fears when you come to them with open arms.

In the same way that conducting a penetration test is an iterative, evolving process, making an ally of your testees is a wheel that keeps on turning from initial interactions to the latest remediation testing. Let’s cover what that looks like throughout the length of an engagement. 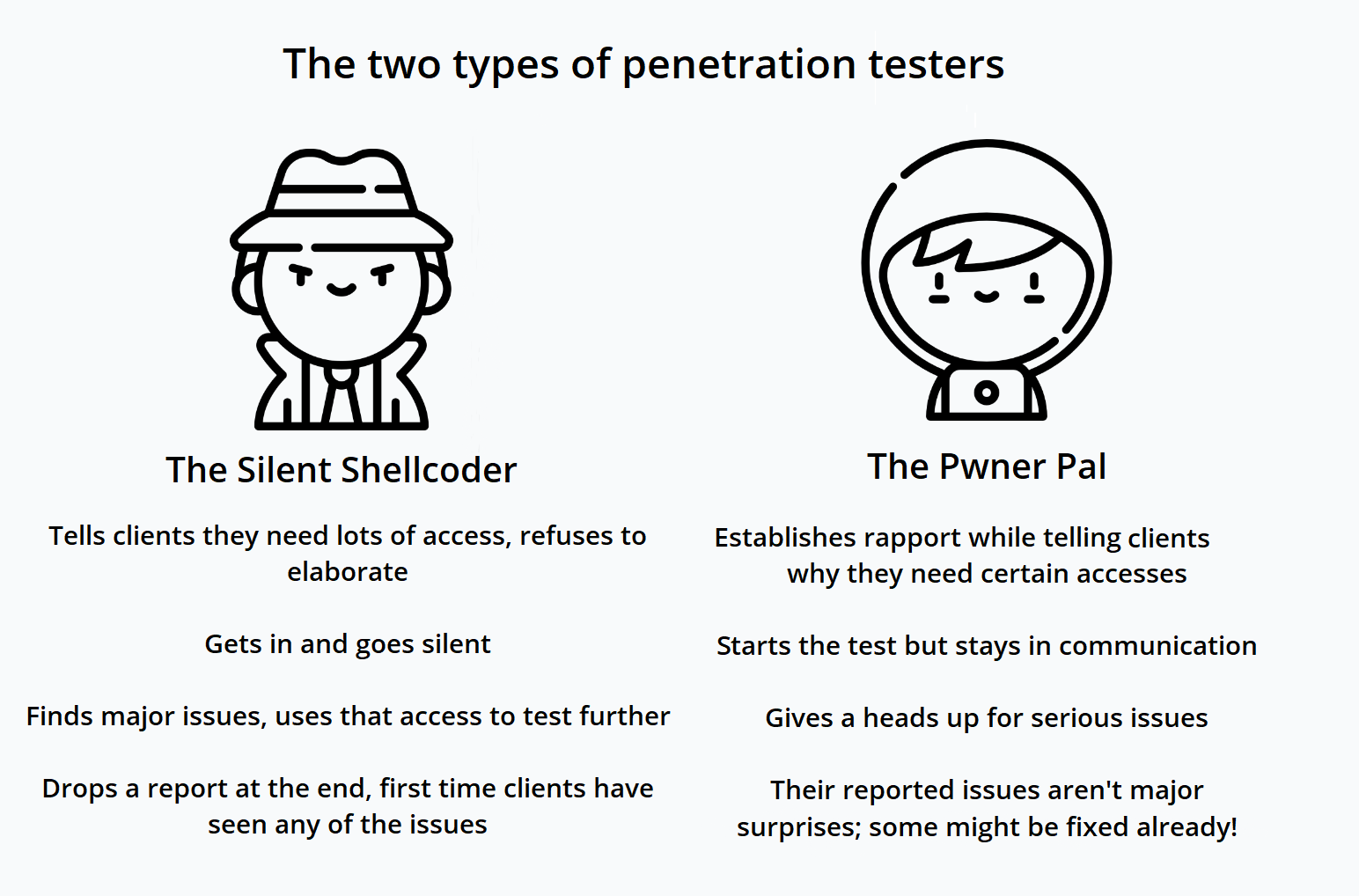 Our two friends above help illustrate the differences between an adversarial and a friendly pentest!

Any Way You Want It: Scoping, Starting and Solidarity

The kickoff of a penetration test can be a stressful time for the client team having their system tested. Not only are their schedules interrupted, but they might feel like they have targets on their backs based on what’s found during the event. This dynamic can result in penetration testers being given limited accesses, or might even lead certain known vulnerable resources to be hidden before an engagement.

Given the above, one mark of a successful penetration testing team, as odd as this sounds, is empathy! If you understand why your team might be viewed under a lens of suspicion by the folks you’re faithfully supporting, you can make proactive choices to not only make everyone’s lives easier, but ensure that you’re able to conduct the most valuable test possible.

When things have officially kicked off, the life of a technical stakeholder can be filled with anxiety. Not only the young phases of a test are worrisome – they’re waiting around the entire time ready to have something go down or for the security operations center to stress out over a perceived incident. You’ve got the tools, however, to make this a less stressful experience for the concerned client.

The Party’s Over: Closing Out a Test

The climax to a penetration test’s story can be the most stressful part for a worried developer or administrator. In an organization not used to or wary of penetration tests, the end of a security assessment can be a time where results are viewed solely through a critical lens and the question of who’s crying now changes with every vulnerability detailed. In a more healthy setting, however, this does not have to be the case!

Afterthoughts: After All These Years

I’ve seen a wide range of penetration tests of every variety in my time with Dark Wolf, and it isn’t an understatement to say that more often, a customer’s attitude afterwards was most influenced by the soft skills detailed above than the actual technical parts of the assessment. While not every hacker is a fan of dealing in pleasantries, it’s helpful to keep in mind that you’re giving yourself a force multiplier for the success of your engagement when you take these steps. If you make an early enemy of the engineer who’s opening up routes for you to get in, you probably won’t get set up with quite the robust accesses you would have otherwise.

In all actuality, much of what’s described here is not far off from the hacker skill set of social engineering. While I wouldn’t recommend that you actually social engineer a client, understanding how other people work and how to get the best out of everyone in a collaborative professional setting is a worthwhile endeavor. When it comes to setting yourself up for a successful and hassle free pentest, be good to yourself by being good to others. In the meantime, if you’ve been on the negative side of this process from either end and want to chat about making it better, shoot me an email at tyler.fordham@darkwolfsolutions.com.

If you can identify every Journey reference in this blog, then… congratulations, you occupy a small cross-section of the Venn diagram of information security professionals and classic rock fans!