The Government has released the Draft RFS (Request for Solutions) for the CHILEEE opportunity. Please find the Draft RFS and accompanying attachments below.

Cyber Electromagnetic Activities (CEMA), the synchronization and coordination of offensive, defensive, inform and enabling activities, across the electromagnetic environment and cyberspace, are increasingly jeopardizing the survivability and security of Department of Defense (DOD) assets and infrastructure. The U.S. Army Electronic Proving Ground (EPG), working with the Army’s Redstone Test Center (RTC), is charged with providing developmental test (DT) capabilities that expose tactical assets being developed for our Warfighters against realistic hostile electromagnetic environments to include CEMA. The increase in CEMA hostile activities is being driven, in part, by the proliferation of software defined radio (SDR) technology and personal electronic devices making radio frequency (RF) development faster, cheaper, and easier. EPG lacks a capability that will enable better DT of tactical systems against CEMA attacks in a repeatable, agile, and adaptive environment.

CHILEEE will also attempt to employ artificial intelligence (AI) / machine learning (ML) for the development of CEMA and electronic warfare (EW) threats. Successful utilization of AI/ML for this purpose would provide a game-changing capability in this area of DT. However, success in this part of CHILEEE is not required for this development to provide significant capability to EPG.

The CHILEEE prototype project will use state-of-the-art SDR technologies to provide a HWIL test capability that exposes a SUT to realistic RF environments. SUT types that will benefit from CHILEEE include, but are not necessarily limited too, command and control (C2) systems, tactical radios, information technology (IT), assured position, navigation, and timing (APNT), radars, and missile fire control systems. The RF environments will include RF signals emulating radios, Wi-Fi, cellular, global positioning systems (GPS), other country GPS signals, and other commonly occurring signals. The RF environment will include signals produced by Army, Joint, and Coalition systems such as radars, tactical radios, and jammers. Furthermore, the RF environment will include known common RF threat signals, integrated air, and missile defense (IADS) assets, and include any available threat waveforms developed by other organizations. Finally, the RF environment will be augmented by complex CEMA attacks some of which will include threats generated by ML algorithms. The Government anticipates this effort will be unclassified (UNCLASS).

The envisioned CHILEEE prototype solution is depicted in the figure below. 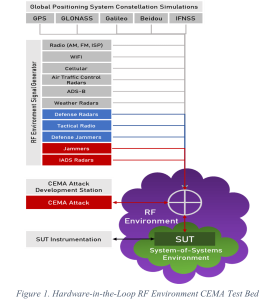 This opportunity is a TReX OTA